Don't be afraid to show who you really are. 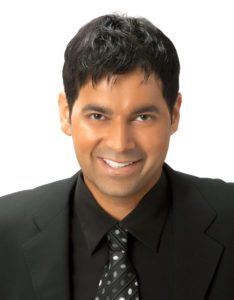 Dr. Reef Karim, a leading expert in human behavior, has dedicated his life to educating, entertaining and helping people understand themselves better.

Dr. Reef is a double board certified psychiatrist, addiction medicine physician and relationship expert as well as a writer, comedic host and media personality. He is an Assistant Clinical Professor at the UCLA Semel Institute for Neuroscience and the founder and director of Lumion Center Beverly Hills, a personal transformation center for self-expression, mental health, relationships, personal growth and chemical and behavioral addictions (lumioncenter.com).

The good doctor is a highly sought after speaker and is well known in the media with recurring appearances on:  Oprah, Dr. Oz, CNN, Larry King Live, Dr Phil, Anderson Cooper 360, Nightline, The Today Show, Chelsea Lately and many others. Dr. Reef hosted the television shows Broken Minds on the Discovery Network, House of Clues on Court TV and Outrageous Acts of Psych on the Science Channel. Dr Reef also writes, produces, and hosts the new online late night talk show Reef Madness where he breaks down the best and most controversial topics in human behavior. Reef guest hosted the popular radio show Loveline with Adam Carolla and guest hosted KFI News in Los Angeles.

Reef is the co-author of the dating psychology book Why Does He Do That? Why Does She Do That?, his literary work is frequently published in Forbes and Huffington Post and his research on human behavior has been published in many prestigious academic journals including, The International Journal of Neuroscience and The Journal of Addiction Medicine. He has a special interest in American Pain, Fame Addiction and The Neuroscience of the Self (fameaddict.com).

Also known as The Sex, Drugs & Relationships Doctor, Dr. Reef is all about self-expression. He believes “Laughter really is the best medicine,” and as such, has studied improvisation for years and performs stand-up at comedy clubs all over Los Angeles. With improv and performance training, he’s had the opportunity to act and consult in both Hollywood and Bollywood movies playing lead and supporting characters and he’s worked as the technical medical advisor on big feature films and television shows including: Private Practice, Alias, Bourne Identity and many others.

For his work in medicine, advocacy, research and entertainment, Dr. Reef was voted one of People Magazine’s Sexiest Men Alive.